A wise editor used to warn me, when my headlines got too lurid: ‘Don’t over-egg it.’ The best stories can be told in simple language, he said — no need for frenetic words and superheated imagery.

The long feud between Elizabeth I and her cousin, Mary, Queen of Scots, is the very best of stories. Two monarchs, both of them women, ruling Britain in an era of war and religious upheaval, so envious and spitefully afraid that neither can afford to let the other one live. 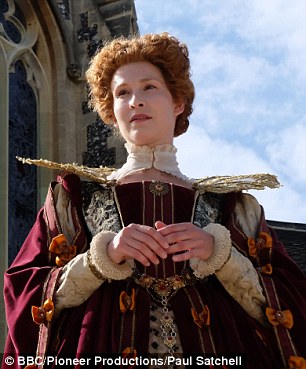 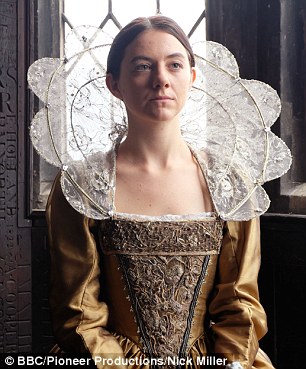 The long feud between Elizabeth I, left, played by Helen Bradbury and her cousin, Mary, Queen of Scots, played by Beth Cooke was portrayed in Bloody Queens

There’s sex, murder, assassination plots, kidnap, spymasters and revolution. It’s a mystery that this 16th- century intrigue isn’t the basis of a series of Booker prize-winning novels or a racy costume drama, in the way that the infatuation of Henry VIII with Anne Boleyn inspired The Tudors and Hilary Mantel’s Wolf Hall.

It did inspire Bloody Queens: Elizabeth And Mary (BBC2), a documentary in which actors in costume read portions of royal correspondence as if they were in conversation with each other.

But perhaps because the producers were frustrated that the story deserved far grander treatment, they over-egged it, until this wasn’t so much historical record as television omelette.

The problems started with the title, Bloody Queens, which sounds like a low-budget horror movie. Maybe the Beeb imagined it would attract Game Of Thrones fans, eager to see Elizabeth and Mary fight to the death with magical daggers in a sun-baked colosseum.

The truth is that the two rulers never met, let alone fought, but that’s part of the fascination of the tale. It’s often been related on TV, of course, despite the voiceover’s dubious claim at the beginning: ‘Here for the first time on television, dramatised purely from the words of the two queens and their courtiers, is the fateful story of Elizabeth and Mary.’

NECKWEAR OF THE WEEK

The fruity, mocking tones of Dave Lamb are familiar to Come Dine With Me fans, but in Come Dine Champion Of Champions (C4) the narrator’s finally in front of the camera — elegant cravat and all. Dave looks like a slightly depraved baronet . . . just the way he sounds.

What this actually meant was that some of the letters hadn’t been read aloud on telly before. There was new historical material, but that hardly justified any pretence that the story was unknown.

The narrator went into flights of eggy ecstasy about those letters. They were, ‘written with an elegance and passion that still burns through the paper’. When Mary put quill to parchment, ‘each word scored into her embittered heart’. That hyperbole belongs in trailers for Thirties Hollywood queens like Greta Garbo and Bette Davis, not measured documentaries about British monarchs.

Helen Bradbury and Beth Cooke, as Elizabeth and Mary, both read splendidly. It was just a shame that they were talking heads in ruffs, who never aged a day nor even changed their dresses throughout 20 years. That’s a sure sign of a tight budget.

The best moment came when Cooke dipped her gaze, as she spoke of the murder of Mary’s lover, Rizzio — he was dragged from the queen’s arms by her husband and his thugs, and stabbed more than 50 times in front of her.

As she looked back up to the camera, her eyes were overflowing. ‘No more tears,’ she said softly. ‘I will think upon revenge.’ For heaven’s sake, someone turn this into a proper TV drama.

Silent Witness (BBC1) is never afraid of melodrama. This show is all about overkill, of every kind. In recent years, the sky-high body count and the extraordinary murder methods seemed to be hiding a weariness at the heart of the series, which has been running since 1996. This season, though, has been as fresh and inventive as the best, and it is ending with a corker of a double episode. 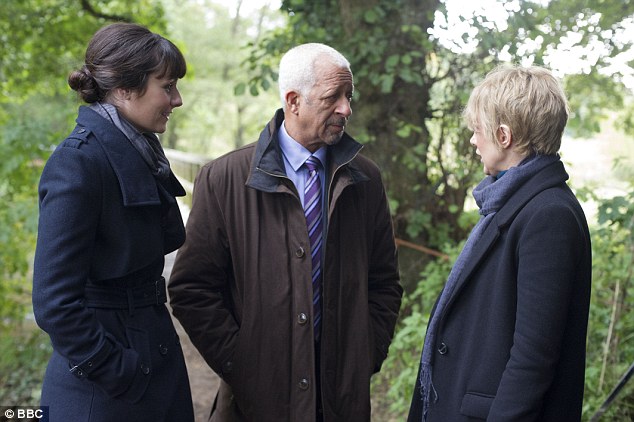 Fresh and inventive: The double episode of Silent Witness to end the latest series is a corker

A family is murdered on a riverside picnic, a young medic is blackmailed into performing life-saving surgery on the sex fiend who molested her, and two naked young women are discovered in the deep freeze at a woodland cottage.

That’s enough calculated evil to satisfy the greediest crime buff. And to top it nicely, veteran children’s presenter Derek Griffiths — fondly remembered for Play Away in the Seventies, when he sported a Lionel Richie haircut and moustache — played the shrewd old detective determined to solve an ancient case before he retired.

Tonight’s finale will be a barnstormer, sure as eggs is eggs.