As the day broadens and crowd starts settling in, a young, nursing mother prepares for the challenges she might encounter while eking out a living for her family on the tracks a little off the Dimapur railway station. A third-generation Dimapurian who comes from a clan of potters in Rajasthan also lays down his shoe-mending tools on these very tracks to provide for his young family.

It isn’t the safest of arrangements; whenever a train approaches, the goods are moved off the rails, to be brought back when the train has passed. Despite the dangers lurking around, and the incursion of law enforcement agents, there are many like them who arrive in droves and display their wares ‘taking refuge’ on the rail tracks in order to survive.

The Dimapur railway station is situated right in the heart of the city and what seems to be a tiny bustling market beside it was originally a space that served as a shortcut between one of the oldest and densely populated residential areas, Walford, and a bazaar which many consider a dumping ground for cheap Chinese goods, Hong Kong Market. 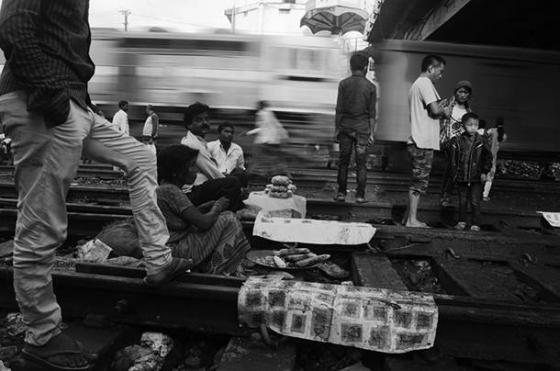 Right side of the tracks: A few of the market dwellers continues business not bothered by the moving train.

Having grown up in the city meant having grown too familiar with places like this makeshift market which doesn’t even bear a name. But no sooner did I pay heed than I was left with more questions than answers — why do these people engage in energy-sapping trading given the daily risks associated with rail tracks? Is the patronage more favourable since many people pass by the rail lines? What about the police, do they not make an attempt to dislodge traders from these tracks? I was curious.

These tracks had a story to tell, a story that belongs to and remains affected by the little town it resides in. 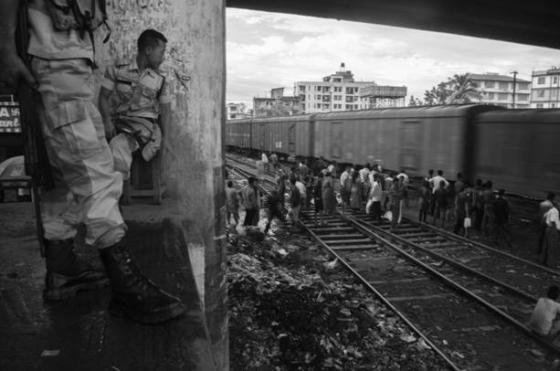 And they look on: The presence of law enforcement does not deter the crowd at the market.

The kitchen market set up by the local women offers a fascinating experience and a glimpse into the local way of life; it remains true to its roots. The aroma of Naga spring onions, ginger blossoms, Naga King chillies, fleshy bamboo shoots and a host of other aromatic Naga herbs wafts through the air, while the sound of slippery eels (locally called khungshia) and cat-fish stirring in tiny water reservoirs resonating with the croaking of wet-weather frogs can be quite an earful.

There were silk worms, dog meat and edible snails (hamuk) for the more adventurous.

The makeshift market is also thronged by migrant and immigrant workers who earn their daily wages as cobblers, money exchangers, shoe-shiners and hawkers – selling just about anything. Some came from neighbouring Assam while some from as far as Rajasthan; there were also plenty from Nepal and Bangladesh. 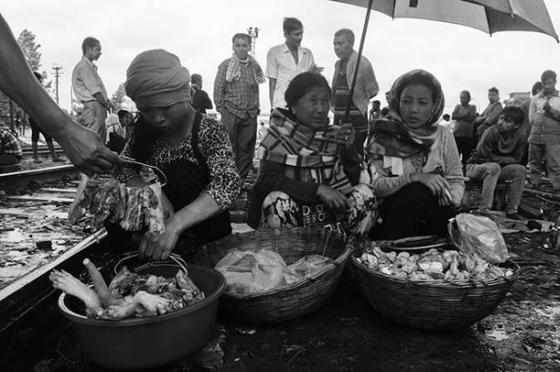 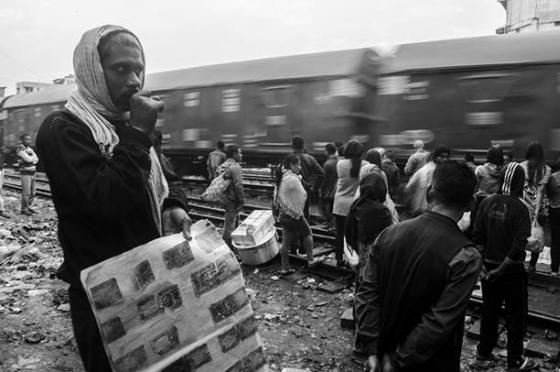 Money money money: A money seller’s business on halt as the train passes 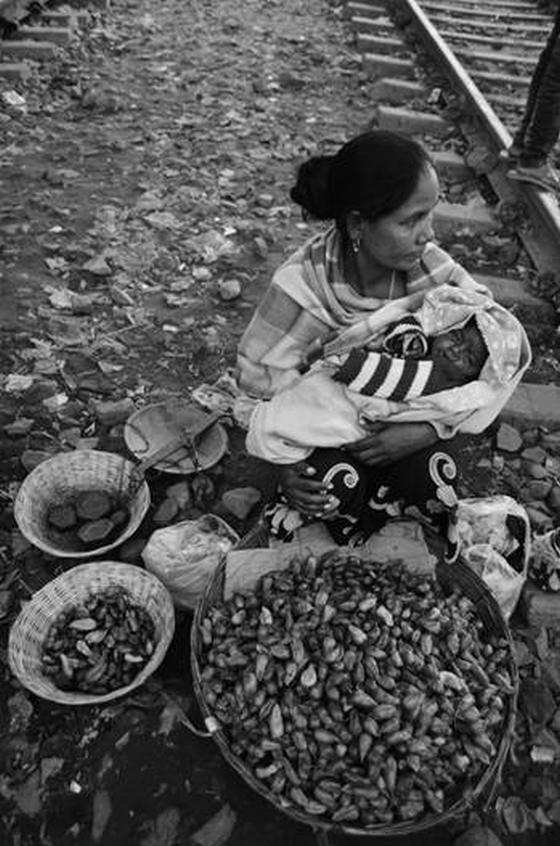 Movement is the only constant in this place. A few alarms go off at the sound of a train’s fog horn, a couple of them turn on their alerted face while most of them pull themselves back from the tracks, sometimes, only moments before.

The movement of a train is most memorable in all its sights and sounds; like two worlds colliding in a space where the more dominant one drowns out the other— leaving it mute, silent, and still. Pedestrians rush about cutting across the fresh train trails; the market takes shape again- And business resumes.

“Where are you going? They’re not after you,” said the stranger in Nagamese. The hawkers — like rare animals in a thick forest- had cleared the area so fast that the visit from the railway station’s lathi-armed policemen seemed like a successful attempt at driving them away. Five minutes after the inconvenience, the market is back to its original state — just a little jumbled up- which proves the warning attempt to be anything but successful. And business resumes.

Despite these daily interruptions, the hawkers stick like magnets to these tracks; some are even accompanied or visited by their families — it was their home away from home. Even during days with nothing to sell, they remain content with a board of ludo game and good company. 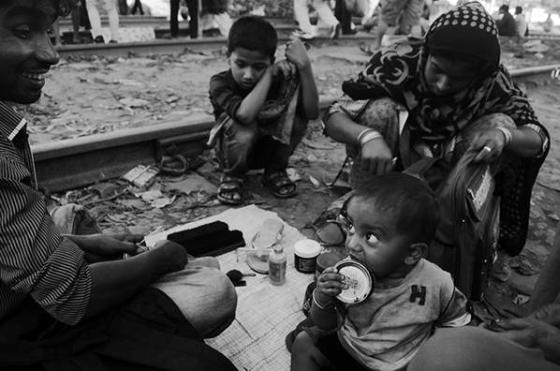 Apple of his eye: A cobbler gets a little surprise visit from home 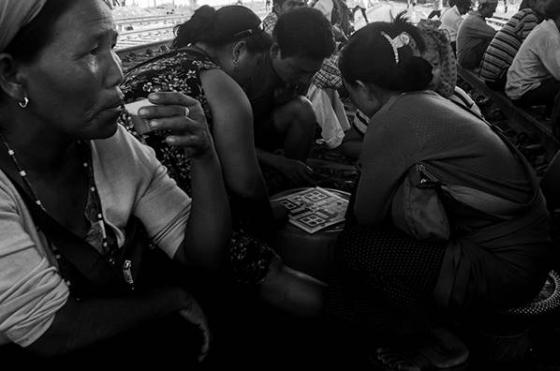 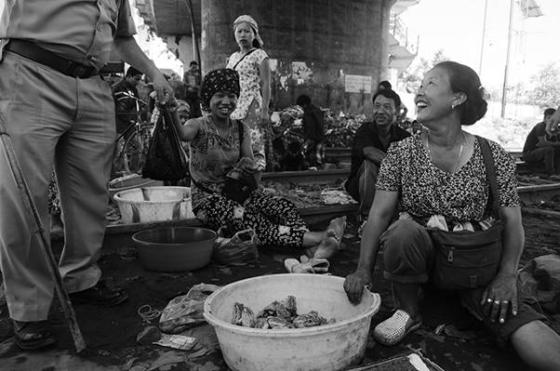 An exchange of jokes, laughter, and live frogs: A friendly policeman doing business with the traders.

It’s been almost two years since the lynching of an immigrant from Bangladesh in Dimapur, rumour is rife in the city about growing tensions and conflicts between the locals and ‘outsiders’; however, much of the charm at the railway tracks lie in the peaceful coexistence – they draw themselves apart from social conventions, choosing to live in a cloistered world of their own. 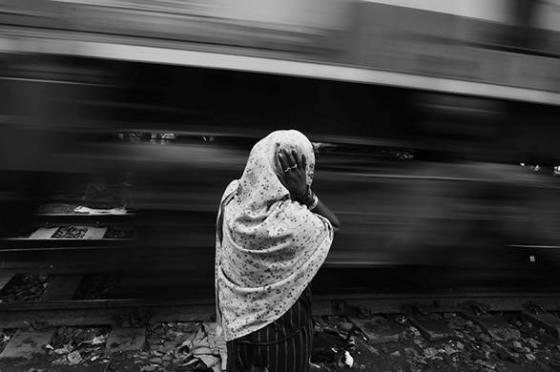 The market muted by the sound of a train 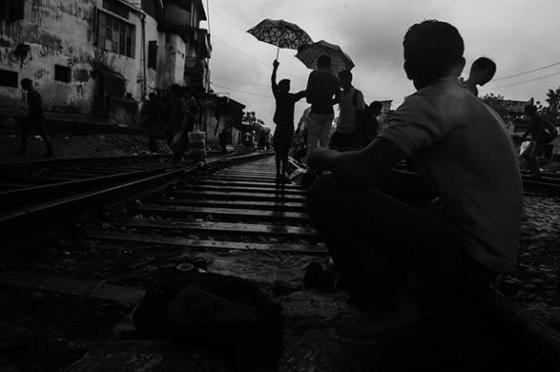 The calm before the storm

Maybe a few years from now, places like this market will be replaced by the slow-growing city’s newer microcosms, but what I saw sprawled on the garbage-strewn railway tracks was the Dimapur that I know of today – a melting pot of many cultures, iconic for her role in uniting a multiplicity of people across diverse states – giving Dimapur its vibrancy and energy.