Soon after leaving Portland for the mightily beautiful three-hour trip north to Seattle, our train comes to a gentle stop. We are briefly marooned on the edge of the broad and far-travelled Columbia river – and with a view fit for the cover of a travel brochure. Nobody complains. There are worse places to be stuck on a train.

I can see far up the river into the Cascades – our train’s namesake mountains, and part of the chain running parallel to the Pacific coast from California to British Columbia. We are paused on the most rugged, remote and glaciated stretch, known as the American Alps.

There is silence. Then the conductor’s voice comes across the public address system to announce brightly: ‘Folks, they just raised the bridge to let a boat through. It’s considered bad form to try to cross the river before you put the bridge back down.’ 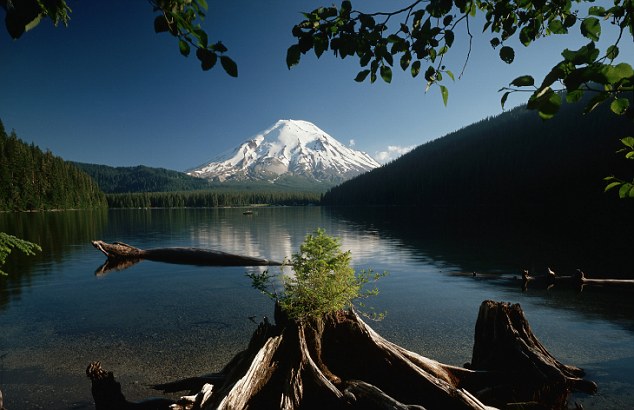 High light: The baddest peak of all is the volcanic Mount St Helens

With Amtrak’s Cascades train now spared from a possible re-run of the Tay Bridge disaster, the jovial conductor adds some brief and Oregon Tourist Board-pleasing detail on the river. ‘1,243 miles long, fourth largest river in the US. The great explorers Lewis and Clark [who famously trekked across America to the Pacific in 1805] came this way.’

This is to be a theme of the trip: value-added announcements. No stop is so small that it doesn’t merit a glowing eulogy. ‘Folks, this is Centralia. Now, they sell some mighty fine antiques here …’

He suggests that people sitting near a faulty corridor door might want to move to the next carriage, ‘because it will get a bit noisy’. While telling us this, he scoops up a piece of litter, as if keeping a spotless train is in the job description.

We are riding America’s born-again railroad on Amtrak’s Pacific Northwest route. The USA and the Iron Way go back a long way. The train helped make the nation, sparing pioneers from perilous travel by covered wagon. But the great days ended in the Fifties. Train travel was killed by the automobile and the aeroplane. 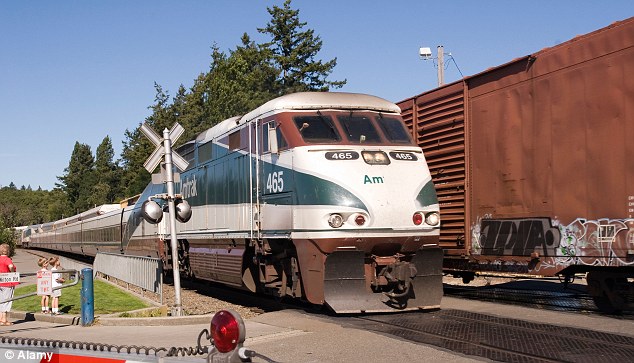 Amtrak, owned largely by the US government, began running trains on a few lines in 1971. The Cascades service started as a single daily round trip between Portland and Seattle in 1993. Now there are four, with two trains a day continuing north to Vancouver. One, the Coast Starlight, runs daily all the way from Seattle to Los Angeles, and takes in California’s Pacific coast.

An hour before our unscheduled stop, I had been standing in Portland’s grand and ornate Union Station waiting for my train, warming my hand on a cup of railroad coffee.

One of the great ladies of rail, The Empire Builder, made her entrance from the east. This train is a throwback to the railroad’s glory days. It’s the Flying Scotsman, the Golden Arrow and South Africa’s Blue Train all coupled together, only bigger.

Her 2,257-mile journey from Chicago had taken nearly two days. Amtrak’s advertising slogan, in the land of the occasional exaggeration, is spot-on: ‘The perfect way to experience the rugged splendour of the American West.’

So is the gilded era of travel that this train embodies about to return? President Obama is proposing new high-speed lines across the nation. On the west coast, the Portland to Seattle and Vancouver route is slated for a major upgrade, with more and faster trains. 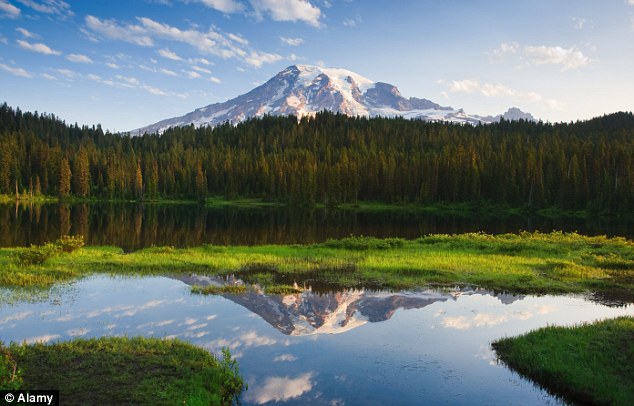 Big surprise: Mount Rainier is so epic and unreal that it wouldn’t be out of place in the Himalayas

But the railroads know they’re still in a dogfight with the airlines and they apply the same ‘let us entertain you’ philosophy. So, safely across the Columbia river, I am not so surprised to hear our conductor announce that a movie is about to begin.

That might be just right to help frequent travellers while away their journey, but I prefer one of the best free shows in the Pacific Northwest, available from my window.

The state of Washington is unwinding at a leisurely pace. Up ahead, our engine gives a demented wail of warning at each level crossing. The view takes you deep into the Northwest’s sylvan idyll. There is a clearing in the woods, with a little farmstead, a pick-up truck, and some cattle grazing a lush meadow, against a backdrop of trees.

In the middle distance, wooded slopes clamber up to a noble backdrop of snow-capped peaks. The first is Mount Hood, a key reason Portland is the beer capital of the USA, as its pure water feeds the city’s breweries.

The peaks grow meaner, and baddest of all is the volcanic Mount St Helens. In 1980 the biggest eruption in America in modern times blew 400ft off its top and killed 65 people. It’s been peaceful lately.

The conductor does a nice line in advance notice. ‘Folks, in about ten minutes we arrive at Olympia, state capital.’ He informs us the capitol building looks like its namesake in DC. And that a VW Beetle would fit into the chandelier in the dome. 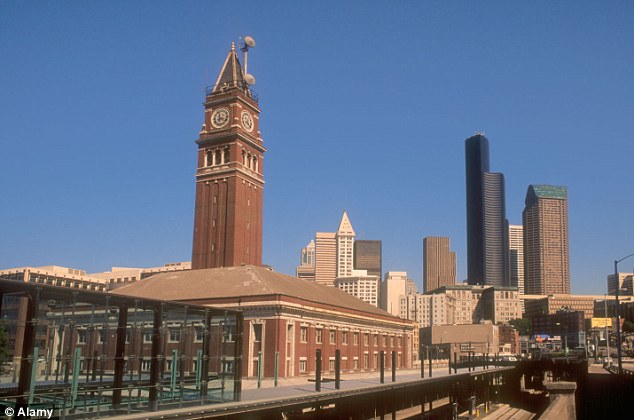 Memory of Europe: King Street station in Seattle is an exact replica of Campanile di San Marco in Venice

In the buffet car, the manager is telling complete strangers about an entertaining time last night. ‘These folks were playing Cranium, which is based on Ludo. Now that’s a great game. By the end, we all joined in.’

This good nature was infectious, or maybe this is how Amtrak passengers always behave: I see two ladies strike up a conversation about knitting, and a couple swap newspapers.

On my left, the Pacific coast is a succession of rocky headlands and quiet bays. Unfamiliar seabirds zing over the placid waters. The port of Tacoma hoves into view, across a big, curving bay. ‘They call it City of Destiny,’ remarks the conductor. ‘It has the 500ft-long Bridge of Glass, with three amazing glass installations.’

All the while, and certainly unexpected by me, the biggest surprise of the entire trip is about to break cover. We round a bend and there, about 50 miles away, is a vision of American grandeur, so epic and unreal I think for a moment it is a reflection from the TV in the window. It is a peak that wouldn’t be out of place in the Himalayas, its top half swathed in apparently infinite snowfields.

Oddly, the conductor is too busy preparing us for Seattle to comment on Washington State’s half-size version of Everest. It is only later in the day that I find a postcard and positively identify the mighty Mount Rainier, which rises to 14,410ft.

We pull in to Seattle at the end of my trip for more proof that America has finally stopped beating up its railways. King Street station looms against the city’s gleaming high-rise skyline as an unexpected memory of Europe. It’s an exact replica of Campanile di San Marco in Venice. The city of Seattle bought the old station building and when builders peeled off dowdy coverings and tore down false ceilings, they revealed glorious original details fit for a Venetian Doge.

I’d just spent a zero-stress morning drifting serenely through epic scenery, away from freeway gridlock and airline queues. The only pressure was deciding which side of the train had the better view. But Seattle had one last pleasant transport surprise with which to end my journey: buses from the station to the city centre, where my hotel was, are free.

A return ticket on Amtrak’s Cascades train between Portland and Seattle costs $62 – about £40. For further information visit amtrak.com.

For more information about Oregon go to traveloregon.com and for Washington State visit experiencewa.com.